Biographies of TBAC Instructors in 2021 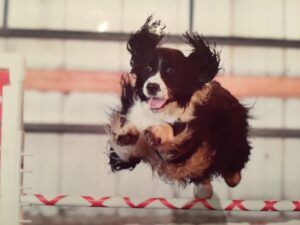 Nancy has been training dogs in agility for over 20 years. Her first dog was a Golden Retriever who wasn’t interested in running a course unless she could do it with three tennis balls in her mouth! Since then, she has had four Springer Spaniels who have shown various levels of enthusiasm for the sport. The first one was very slow until she got about halfway through the course and then she’d speed up and I’d have to hustle to keep up.” The second one was fast and driven, but she let her contact performance slide and they spent the rest of her career trying to fix them. The third one had some health issues when she started and it wasn’t until she was about 5 that she decided agility was a fun game and she wanted to play. Her current dog, Jack is very talented but has some focus issues.  “Each dog has taught me something about training. Each dog had different things that motivated them and it was my job to find out what that thing was.” She has been to AKC Nationals twice and thoroughly enjoyed watching the best in the sport. She has completed the AKC Championship MACH title with 2 dogs and a NADAC NATCH title on one.  “I’ve learned something not only from each of my own dogs, but also from each of the dogs and handlers I’ve helped train.” Agility is a sport you play with your best friend. What could be more fun?”

Sandy has taught, competed, and titled dogs in AKC obedience, but, in 1988, she found a new sport that was even more fun – Agility. Her first agility competition was in 1989. Since that time, she has put numerous titles on her own dogs, which include a terrier mix, three Tibetan terriers, in addition to a friend’s corgi and Chinese crested. Sandy has also shown three Portuguese water dogs and has put water titles on all three; two of them were breed champions. Sandy is also presently competing with a border/jack and a border/papillon. She has qualified and competed at the USDAA, NADAC, and AKC nationals. She owned the first MACH Tibetan terrier and two of them were ranked #1 for several years. She also attended the very first AKC agility trial in Houston, Texas. Every year  Sandy attends camps and seminars to keep up with the current trends in teaching. Among her agility teaching credits are  The Dog Training Club of Chester County for about eight years, all levels and beginners classes at Berks Dog Training Club for five years. She was one of a small group of agility enthusiast that founded a new AKC agility club which became Tail Blazers. Sandy has taught for us since our inception!  She also presently teaches for a USDAA group, Flexible Flyers.  Sandy instructs  all levels of classes and takes joy in celebrating the growth, fun and successes of teamwork. 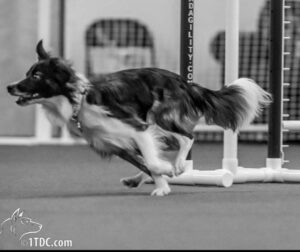 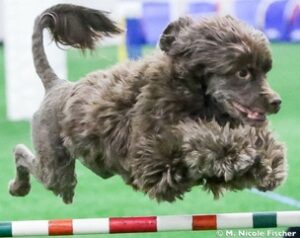 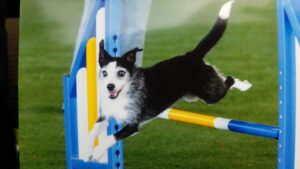 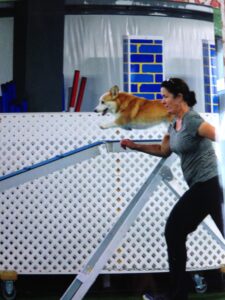 Sandi saw her first agility demonstration in 1990 and knew she was destined to get involved. She has been training and running her Pembroke Welsh Corgis in the sport since 1992. Several of Sandi’s dogs have finished their Agility Dog Championships.
Sandi tries to stay current in her training with lessons and attending agility seminars and camps.
She believes dog agility is a team sport involving a dog and a handler and that everyone should be successful. She really loves turning a dog and handler into a real working team!

Wednesday night classes are taught by Kathy Marshall and Mark Evans. Together they account for over hundreds of AKC agility titles, numerous titles in other venues and over 35 agility Championships.  On a regular basis they qualify for national and invitational events.  They have over 30 years combined agility training and trialing.

The classes are fun and challenging.  Multiple training methods are used.  No one method suits every dog and their years of experience allow for tailoring training to suit the individual dog. 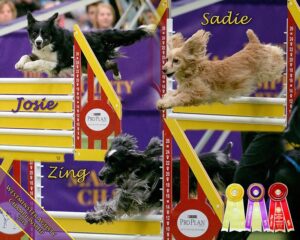 Linda has been a training member of the Tail Blazers Agility Club since 2005.  Her Novice A dog, Sadie went on to earn numerous championships in AKC and USDAA over her 14 year career.  She has trained and competed with 3 other dogs- two English Cockers and a Border Collie.  She began teaching at TBAC in 2011 in the Open Level class.  She continues to learn about the sport from her mentors Sandi Daniels and  Nancy Schilling.  She also supplements her face to face training with Tom and Lauren from Absolute Dogs and Jennifer, Sarah, and Estaban from Bad Dog Agility.  She believes that there is always something new to learn!  Linda loves passing her knowledge on to others and seeing handlers and dogs working and having fun together.